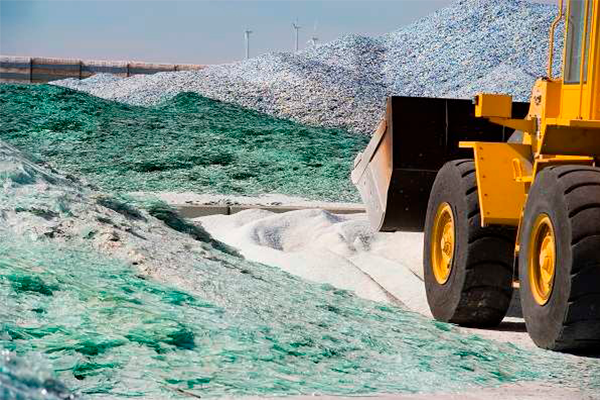 FCC Servicios Medio Ambiente, through its subsidiary FCC Ámbito, participates in a wind turbine blade recycling project to address one of the most important medium and long-term challenges for the renewable sector and the energy transition and contribute to promoting the circular economy in Spain. FCC Ámbito will bring its extensive experience in the recycling and marketing of Secondary Raw Materials (SRM) to identify the best available technology and define the operational processes in the development of up to 4 plants in different autonomous regions, which would cover the country's recycling needs. The first industrial-scale project in Europe would place Spain at the technological forefront of this industry, and would contribute to the creation of more than 400 direct jobs and an innovative and exporting value chain.

The initiative, led by Iberdrola, has been submitted to the Next Generation EU Funds and aims to be an example of public-private collaboration, with the participation of 7 large companies including Siemens Gamesa-, 11 SMEs from up to 8 autonomous regions and 5 public entities.

The investment would contribute to the transition of the wind energy sector to a true circular economy and would improve the competitiveness and sustainability of this industry, through research and implementation of wind-turbine blade recycling technologies and their digitalisation, creating a new industry of composite materials recycling, as the recyclability of turbines is currently around 85-90% and could increase up to 100%.

The project includes the recycling of wind-turbine blades from the repowering of wind farms or those that have reached the end of their useful life or are defective, and will seek the recovery of their main components - mostly glass and carbon fibres and resins - and their use in sectors such as energy, aerospace, automotive, chemical or construction.
The initiative could create more than 400 direct jobs per year -according to data from the  Spanish National Integrated Plan for Energy and Climate (PNIEC)-, connected with an investment in the supply chain by national suppliers, with an essential participation of local companies, especially SMEs, in activities such as collection, treatment, management and operation of the plants, as well as in the marketing of MPS and the development of associated markets. It will also generate induced employment, favouring the economic revitalisation of many Spanish communities, many of them with a major demographic challenge.

With 26,835 MW of accumulated installed power in 2020, Spain is the fifth country in the world in terms of installed wind power capacity, after China, the United States, Germany and India. Wind energy was the second largest source of peninsular electricity generation in Spain last year, employing around 30,000 people and helping to reduce CO2 emissions, avoiding the emission of 29 million tonnes per year into the atmosphere. This industry stimulates local investment and is the fourth largest exporter of wind turbines in the world.

The project is designed to have an impact on the entire value chain, aligned with the 2030 Agenda and the Sustainable Development Goals, as it is oriented towards the ecological transition (SDG 13); the creation of a circular economy (SDG 12) around composite materials that form the blades of wind turbines of existing wind farms and that reach the end of their useful life; and digital transformation (SDG 9). It will also allow the Spanish wind energy sector, as well as the other sectors that use these materials, to anticipate the possible EU regulatory change, which will forbid the deposit of blades in landfills, by collaborating in their recycling.

FCC Ámbito specialises in the recycling of resources, the provision of specialised environmental management services to industrial clients and decontamination of soil. It is a subsidiary of FCC Servicios Medio Ambiente, company that has been providing environmental services for more than 110 years within the FCC group, serving more than 66 million people in 5,000 municipalities around the world. It carries out a wide range of activities, such as collection, treatment and recycling, energy recovery and disposal of urban solid waste; public street cleaning; maintenance of sewage systems; ground maintenance; treatment and disposal of industrial waste and recovery of contaminated soils, among others. It is successfully settled in the USA, where it owns two recycling facilities in Dallas and Houston (Texas), both honoured by the NWRA (National Waste Recycling Association) as the Best Recycling Facility in United States in 2017 and 2020 respectively. In Lostock (United Kingdom), together with the Danish investment fund Copenhagen Infrastructure Partners (CIP), it is developing one of the most modern and largest energy recovery facilities in Europe. In Spain, it has recently been awarded the Waste Collection and Street Cleansing contract for the Central sector of Barcelona, a service the firm has been providing since 1915.