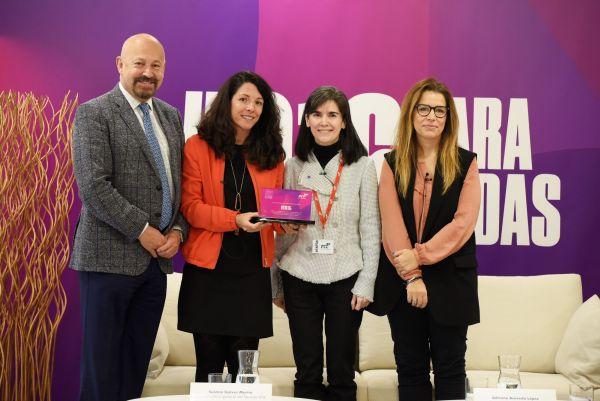 For the fifth year running, the FCC Group wanted to recognise and reward the work carried out by organisations and associations that fight against gender violence and care for women who are victims of this social scourge. In this fifth edition, the award went to the 016 Service, provided by the Government Delegation against Gender Violence, for legal advice and immediate psychosocial care by specialised personnel for all forms of violence against women.

The award ceremony took place this morning at FCC's corporate headquarters in Las Tablas, Madrid, as part of this week's events to commemorate the International Day for the Elimination of Violence against Women.

On behalf of the Government Delegation against Gender Violence, the award was collected by Macarena Gamir, Deputy Director General for Inter-institutional Coordination on Gender Violence, from Pedro Carranza, CEO of the Cementos Portland Valderrivas Group, a company that forms part of the FCC Group.

With this act, we at FCC demand equality between men and women and reject all acts of violence. It is necessary to work to ensure that education and awareness-raising against harassment and gender violence in all its forms reaches the entire population, regardless of their level of education. It is a joint task in which the sum of efforts will mark the path to success.

Our commitments include disseminating and promoting awareness and denunciation campaigns, as we have been doing in our Group every year, and at international level, as well as joining forces with institutions, organisations and associations to make their campaigns and information reach as many people as possible. It is a joint task in which the sum of our efforts will mark the path to success.